To my surprise and disappointment, when Governor Cuomo recently came out with the 2018 NYS Budget he did not include any new funding for the closing of Indian Point. The Cessation Mitigation Program is a mechanism in the budget that helps communities gradually adjust to the tremendous negative fiscal effects of a plant closing. This program is already utilized by the two other NYS plants in the process of closure, so whatever funding is presently in the program is not sufficient for the Indian Point closure. The Governor must help plan ahead to help the communities surrounding Indian Point that will be devastated economically by the plant’s closure. Combined, the Village of Buchanan, Hendrick Hudson School District, Town of Cortlandt, County of Westchester, as well as the local library and fire department will see a $32 million reduction in tax revenue.

Once I learned the proposed budget did not include new funding I immediately called for additional funds to be added to the budget, dedicating a specific line item in the Cessation Fund budget solely for the Indian Point area. We need to start gradually building up the dedicated fund now, three years in advance of the possible plant closure. It can’t be done all at once at the end of the process.

Senator Terrence Murphy felt the same way and, along with Assemblywoman Sandy Galef, successfully added $24 million to the Cessation Mitigation Program funding in the final budget that was signed by the Governor. Just as important, the funding was included as a dedicated line item specifically earmarked for the Indian Point closure. My colleagues on the Westchester County Board of Legislators supported my efforts to include the request for this funding as part of the Annual Legislative Packet that is sent to our Westchester State Delegation who deliberate on the NYS Budget. By including the request in our packet, it demonstrated to all state representatives how important the issue was to a large portion of the state and the tremendous number of people it will affect. Not only will the taxpayers of the area be impacted, but so will the 1,200 families whose jobs are in jeopardy along with local businesses who will lose a significant portion of their customer base and revenue.

I was happy to stand in a bipartisan manner with Senator Murphy on April 11, 2018 along with Assemblywoman Galef, Buchanan Mayor Knickerbocker, Hendrick Hudson School District Superintendent Hochreiter, Cortlandt Supervisor Puglisi and other local representatives and union officials to announce the additional Cessation Mitigation Program Funding and thank those involved with making it happen. We have a long way to go in planning for a future without Indian Point but this was a positive and significant accomplishment that we can build on going forward. 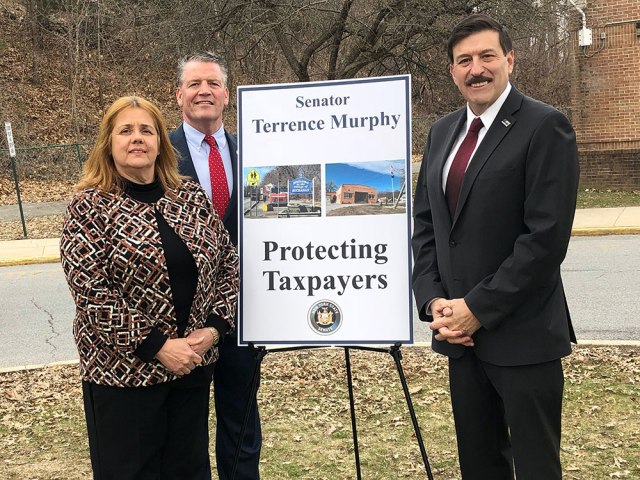 John G. Testa, a life-long resident of Peekskill, began his first term on the Westchester County Legislature in January 2010. Prior to his successful run for the District 1 Legislative seat, he served 3 terms as Mayor of Peekskill from January 2002 until December 2007. Before becoming mayor he also served a four-year term as a Councilman. From his first days in office Testa worked tirelessly to set the City on the path of economic stability. Peekskill flourished under this plan, increasing the city fund balance to its highest in history. During John’s tenure in office, the NY State Comptroller’s Office named Peekskill one of the most fiscally sound municipalities in the State; independent auditors proclaimed Peekskill as being in its best fiscal condition in over 30 years; and Moody’s Investor Service agreed to upgrade its bond rating, resulting in further savings. The plan he put in place was so successful that it enabled the City of Peekskill to pass three budgets in a row with a 0% tax increase. These fiscal skills will prove valuable to Testa as he works to put the brakes on what has been wildly escalating county spending and unchecked government growth. He has pledged his efforts to work to consolidate services, eliminate wasteful spending and improve efficiency. In addition to the fiscal conservatism that served Peekskill so well, Testa worked to promote the city, attracting investment, jobs and an increased tax base. Over $100 million of private investment came to Peekskill in the forms of new residential construction, retail space, and the redevelopment of historic structures. As Mayor, Testa led a successful battle to stop the unfair and unsafe plan to send sewage to the Peekskill plant from outside the sewage/water district. John’s roots are deep within the soil of Northern Westchester. His father’s family has lived here for more than a century and his mother’s family is nearing that mark. He is proud that he was born in Peekskill and has lived and worked here all his life and, with his wife Nancy raised their two children here.
View all posts by Legislator John G. Testa →
This entry was posted in government, Uncategorized and tagged energy, Entergy, funding, government, Hendrick Hudson School Didtrict, Hochreiter, Indian Point, John Testa, NY State Budget, Terrence Murphy, Theresa Knickerbocker, Town of Cortlandt. Bookmark the permalink.