Appreciating and collecting items from the past was instilled in me mostly by my father. Growing up, he would always point out objects that were handed down in the family and explain what it was and how it was used. It could be a simple snuff box, porcelain baby feeder or travelling inkwell. He also was famous for bringing home interesting objects that he would pick up from various sources. It was something he started doing early in his career as a Conductor on the NY Central Railroad. His layover periods between trips allowed him to explore different towns and their thrift shops. He especially enjoyed the military surplus shops that sprang up following WWII. It was a habit he continued until his death in 1988.

One of those interesting objects was a large ash splint woven basket. Besides his familiar “they don’t make ‘em like this anymore” reason for bringing something home he also saw practical value in them. I don’t remember exactly when the object arrived in the house but I think it was probably late 60’s or early 70’s. He could have obtained it from Peekskill Military Academy where he worked as a night watchman. The academy closed at the end of the 1968 school year so it could have possibly come as a result of that. More than likely it was used for laundry services. 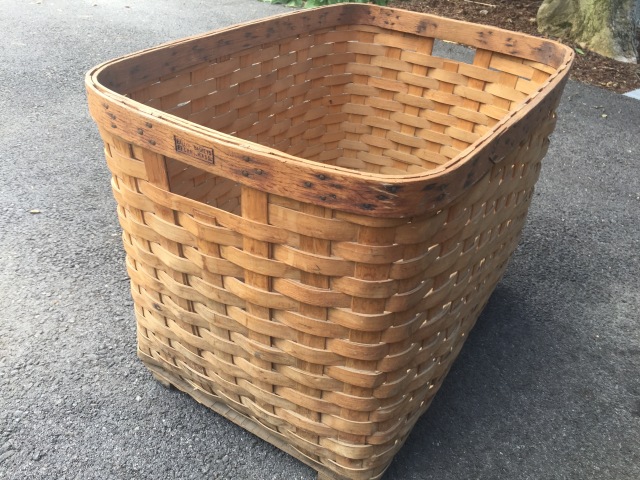 It was larger than a typical basket used for a home but it was put to good use as a storage container for various things over the years, toys especially. It was built to be strong and was obviously of good quality. It held up perfectly. My father knew it would.

In the early 1980’s my parents sold our house on Walnut Street in Peekskill and decided to move out of town. With space limited and downsizing needed, the basket ended up in my garage rafters for the next 35 years. I just couldn’t bring myself to get rid of it. Besides, they don’t make them like that anymore or if they do somewhere, they are surely very expensive. Now, all these years later, it was my turn to make space and downsize. With both of our adult children living on their own, my wife and I realized we had to begin the endless task of sorting through the piles of ‘things’ that have accumulated over the years. So, as we began sorting and organizing for the inevitable garage sale, it was time for the basket to once again see the light of day. Then I took a real close look at this object I took for granted the for last 50 years!

I saw the name and location of the manufacturer burned into the wood near one of the handle openings, Ballou Baskets Becket, Mass. and I decided to do some online research. It took a little work to get information but eventually an amazing history was discovered.

The Becket Historical Commission responded to my email submission to their website requesting information about our basket and the company that manufactured it. After starting as a small shop in 1888 the Ballou Basket Company grew to a larger factory producing quality products sold throughout the country. It was also a significant employer for the Becket area. Then it all came to an abrupt end. 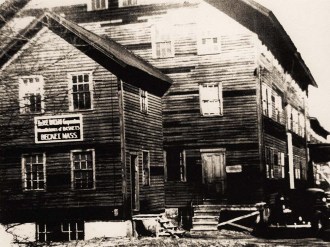 The Ballou Basket Shop, one of the buildings washed away the 1927 flood. (Courtesy of the Becket Historical Commission)

In November 1927, a torrential rainfall caused the local reservoir to give way and flood the area. Within minutes, the basket factory was washed away, along with the homes of the Ballou brothers Willis and J. Clinton. Many other homes were destroyed or badly damaged as well. The post office was gone, area stores were gone too. Although the family did their best to attempt a come-back for the company, the stock market crash of 1929 and the depression that followed made it virtually impossible. Ballou baskets finally came to an end when another family tragedy occurred and J. Clinton Ballou was killed by a locomotive in the early 1940’s.

J.C. Ballou standing in the doorway of his shop with a few of his employees. (Courtesy of the Becket Historical Commission)

We discovered that samples of the Ballou Basket Company are not easy to find. Even in Becket, there are very few samples to show in their museum. Many families will temporarily loan their treasured possessions whenever the town looks to honor their basket manufacturing history.

My wife and I decided we should donate our basket to the historical commission. It was the right thing to do. However, given its size, we were not sure they would want it. To our delight, they were excited to be getting such a donation. Their permanent collection was minimal and there were no samples of baskets of the size we were offering. 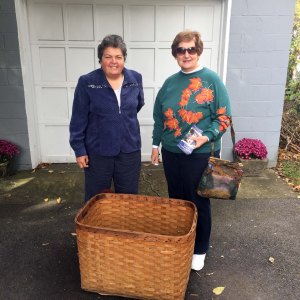 Sandra Jarvis and Joy Lennartz of the Becket, MA Historical Commission happy to take possession of their new artifact.

So, just weeks later, representatives of the Becket Historical Commission travelled to our home in Peekskill to collect the new addition to their collection. They were thrilled and appreciative of the gift. While they were here I was able to give them a private tour of our very own Lincoln Depot Museum. Then, after lunch in the area, they were off back to Becket.

There was only one stipulation I gave for the gift, that the display described the gift as coming “From John and Nancy Testa in memory Joseph L. Testa.” It was an appropriate and fitting attribution to my father to which they wholeheartedly agreed.

So, if you are ever in Becket, Massachusetts stop by the Becket Historical Commission to learn more about Becket and Ballou, and look for our basket. 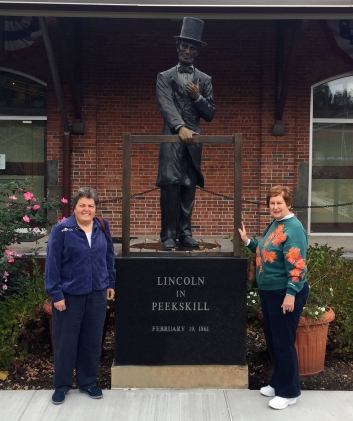 Former District 1 County Legislator, John G. Testa is served five terms at the Westchester County Board of Legislators, spending the last 3 terms as BOL Minority Leader. John G. Testa is a lifelong resident of Peekskill who first entered elected public service as a member of the Peekskill Common Council in 1998 and then served three terms as Mayor. He previously served on the Conservation and Parks Advisory Board and Zoning Board of Appeals. John became an elected official eager to improve the City in which his family has lived for more than a century and quickly earned a reputation as a strong, independent, nonpartisan voice for fiscal responsibility. John received a BS degree in Technology from SUNY Oswego, where his academic achievements gained him induction into Epsilon Pi Tau, the International Honorary Fraternity of Technology. He earned his MS degree in Technology from the City College of New York. He began his teaching career in 1980 at Peekskill High School, his alma mater, as an instructor in Technology and Social Studies, retiring in 2013 after 33 years teaching. John has been a leader in support for the Arts Community in Westchester. He presided over the construction of the Peekskill Art Lofts, the establishment of the Hudson Valley Center for Contemporary Art, and the complete restoration of the Paramount Center for the Arts, originally a 1930’s movie house and helped bring critical funding to many Westchester programs. Legislator Testa received the “Advancing the Arts in Westchester Award” by ArtsWestchester. John has a been a leader on environmental issues for two decades and has a long record of initiatives he has supported and spearheaded. His active involvement in developing and promoting environmentally friendly policies began as mayor and continued throughout his time as Westchester County Legislator. His efforts consistently earned John the endorsement of the NY League of Conservation Voters. John’s most recognizable accomplishment has been his promotion and preservation of local history and historic landmarks, bringing an unprecedented focus on the region’s rich history, and its legacy of historic Victorian architecture. His roots in historical preservation stem from his experience as a Revolutionary War re-enactor and member of The Brigade of the American Revolution for 50 years. John was instrumental in securing the preservation of the Lincoln Depot, now the Lincoln Depot Museum, where he now serves as President. The museum was recognized in 2015 as one of The Best Museums in Westchester. He also secured the preservation of historic Fort Hill as parkland, a 40-acre parcel that was originally a Revolutionary War encampment site. Under his leadership, the United States Dept. of the Interior declared Peekskill a “Preserve America Community.” John was able to establish a record number of National Register designations of local structures, including the first Downtown and Neighborhood Historic Districts and supported the preservation of the historic Miller House in North White Plains. In 2017 John was named a “Champion of History” by the Lincoln Society in Peekskill. John and his wife of 37 years, Nancy, live in Peekskill and have two adult children, John, Jr. (fiancé Courtney Kelly) and Katy (husband Mike Mearon). John and Nancy recently welcomed the arrival of their first grandchild, Lacey Mae, in 2019.
View all posts by John G. Testa →
This entry was posted in history, Uncategorized and tagged artifact, Ballou Baskets, Becket Historical Commission, Becket MA, historic preservation, history, John Testa, Joy Lennartz, Peekskill NY, Sandra Jarvis, Westchester County NY. Bookmark the permalink.