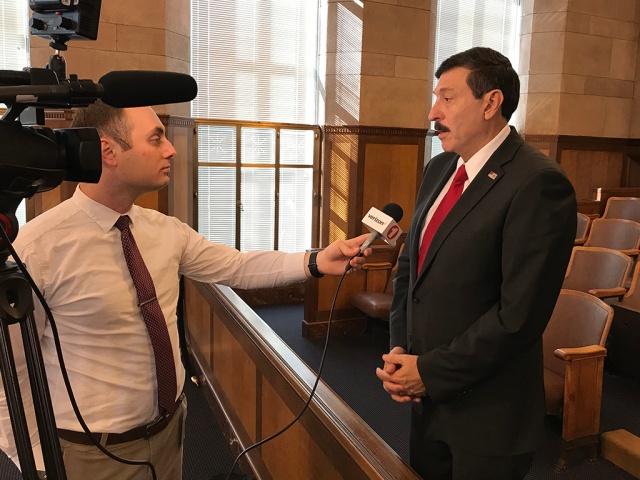 The communities of Peekskill, Cortlandt and Yorktown will receive funding to help deliver important services to those communities senior residents. Legislator Testa was joined by his colleagues on the Board of Legislators in approving an inter-municipal agreement (IMA) that provides up to $30,000 per community operate communications programs meant to inform seniors about the various services that are available to them through the Westchester County Department of Seniors Programs and Services.

Following the vote, Legislator Testa praised the efforts of the Department of Seniors Programs and Services. “Westchester County offers many important and effective services for our senior community. It is important that we take the necessary steps to make sure seniors, their families and caregivers are aware of these services. Looking out for older generations is a moral imperative. This small investment in outreach will pay significant dividends in quality life for our seniors.”

John G. Testa, a life-long resident of Peekskill, began his first term on the Westchester County Legislature in January 2010. Prior to his successful run for the District 1 Legislative seat, he served 3 terms as Mayor of Peekskill from January 2002 until December 2007. Before becoming mayor he also served a four-year term as a Councilman. From his first days in office Testa worked tirelessly to set the City on the path of economic stability. Peekskill flourished under this plan, increasing the city fund balance to its highest in history. During John’s tenure in office, the NY State Comptroller’s Office named Peekskill one of the most fiscally sound municipalities in the State; independent auditors proclaimed Peekskill as being in its best fiscal condition in over 30 years; and Moody’s Investor Service agreed to upgrade its bond rating, resulting in further savings. The plan he put in place was so successful that it enabled the City of Peekskill to pass three budgets in a row with a 0% tax increase. These fiscal skills will prove valuable to Testa as he works to put the brakes on what has been wildly escalating county spending and unchecked government growth. He has pledged his efforts to work to consolidate services, eliminate wasteful spending and improve efficiency. In addition to the fiscal conservatism that served Peekskill so well, Testa worked to promote the city, attracting investment, jobs and an increased tax base. Over $100 million of private investment came to Peekskill in the forms of new residential construction, retail space, and the redevelopment of historic structures. As Mayor, Testa led a successful battle to stop the unfair and unsafe plan to send sewage to the Peekskill plant from outside the sewage/water district. John’s roots are deep within the soil of Northern Westchester. His father’s family has lived here for more than a century and his mother’s family is nearing that mark. He is proud that he was born in Peekskill and has lived and worked here all his life and, with his wife Nancy raised their two children here.
View all posts by Legislator John G. Testa →
This entry was posted in government, Uncategorized and tagged Cortlandt Manor NY, funding, John Testa, Minority Leader Testa, Peekskill NY, senior programs, seniors, Westchester Board of Legislators, Westchester County NY, Yorktown Heights NY. Bookmark the permalink.