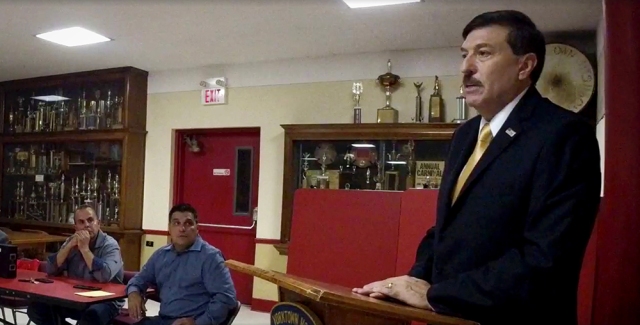 Democratic candidate for county legislator opposing incumbent County Legislator John G. Testa, Nancy Vann, has neglected to participate in two crucial debates for the election. First, she failed to show up for the Town of Cortlandt Candidate Forum on October 17th and then she was a no-show for the Town of Yorktown Candidate Debate hosted by the Yorktown Chamber of Commerce on October 25th. When given the opportunity to commit to and sign a fair campaign pledge she refused that as well.

Speculation for the avoidance of public appearances stems from recent discovery of her law license being suspended since 2013. She was also thrown off the Working Families Party ballot line after it was discovered the petitions she submitted had a majority of invalid signatures. Despite these revelations, Vann continues to improperly claim she is endorsed by the Working Families Party and claim to be an acting attorney. By doing so Vann clearly is violating standard ethical campaign practice and in the case of claiming to be an attorney, possibly breaking the law. Her actions may explain her refusal to pledge to conducting a fair and ethical campaign.

“Many lawyers from both sides of the political aisle contacted me during the summer upset to see Vann indicating she is an attorney on all her campaign literature since she has been prohibited from practicing for the last 4 years,” said Testa. “They were outraged that their profession was being mocked and tainted in that way. It is a clear violation of The Rules of Professional Conduct and all lawyers are well aware of it. Some indicated to me it was even illegal to proclaim to be an attorney with a suspended license and that the reason for the suspension does not matter,” added Testa. 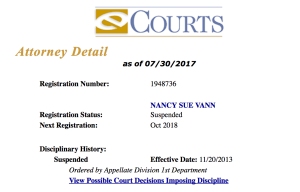 Given that these two very serious violations were bound to surface in a public debate, Vann has avoided the issues by not appearing before the public. Vann has also offered no concrete platform or reason for running against a very accomplished and experienced incumbent. Her only record is that of an anti-establishment activist.

“Nancy Vann has no idea what it takes to work in a bipartisan way to solve problems and work through issues, said Testa. “She seems to be against a lot of things but I haven’t been able to see anything she is actually in support of. That is not someone who could sit down and rationally work through issues and successfully work with others to solve problems. Protesting and holding signs seems to be her strong suit, she should stick with that,” said Testa. 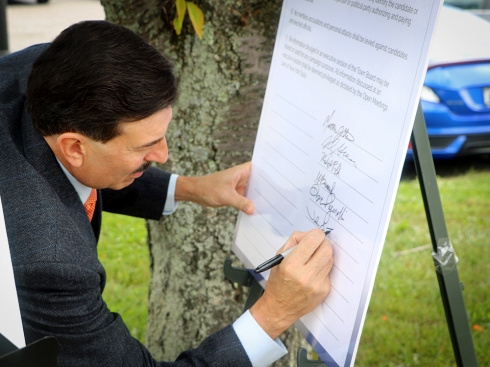 The two public forums that Vann avoided were the last of the campaign season. With less than two weeks left until election day, avoiding the debates was a missed opportunity to speak directly to the voters. “I always enjoy the discussion of issues and setting the record straight during the debates,” said Testa. “The citizens look forward to the exchange between candidates and hearing what they stand for; it is a slap in their face to simply not show up. I appreciate those who organize the debates and thank those in Cortlandt and Yorktown for the opportunity,” Testa said.

John G. Testa is a four-term incumbent of the Westchester County Board of Legislators and has served the last two terms as Minority Leader of the Board. He is a retired high school Technology and Social Studies teacher of 33 years and served 14 years as a member of the Westchester Community College Board of Trustees. Testa is also a former City of Peekskill Councilman and three term Mayor of the city. For more information visit: johngtesta.com and facebook.com/johngtesta.

John G. Testa, a life-long resident of Peekskill, began his first term on the Westchester County Legislature in January 2010. Prior to his successful run for the District 1 Legislative seat, he served 3 terms as Mayor of Peekskill from January 2002 until December 2007. Before becoming mayor he also served a four-year term as a Councilman. From his first days in office Testa worked tirelessly to set the City on the path of economic stability. Peekskill flourished under this plan, increasing the city fund balance to its highest in history. During John’s tenure in office, the NY State Comptroller’s Office named Peekskill one of the most fiscally sound municipalities in the State; independent auditors proclaimed Peekskill as being in its best fiscal condition in over 30 years; and Moody’s Investor Service agreed to upgrade its bond rating, resulting in further savings. The plan he put in place was so successful that it enabled the City of Peekskill to pass three budgets in a row with a 0% tax increase. These fiscal skills will prove valuable to Testa as he works to put the brakes on what has been wildly escalating county spending and unchecked government growth. He has pledged his efforts to work to consolidate services, eliminate wasteful spending and improve efficiency. In addition to the fiscal conservatism that served Peekskill so well, Testa worked to promote the city, attracting investment, jobs and an increased tax base. Over $100 million of private investment came to Peekskill in the forms of new residential construction, retail space, and the redevelopment of historic structures. As Mayor, Testa led a successful battle to stop the unfair and unsafe plan to send sewage to the Peekskill plant from outside the sewage/water district. John’s roots are deep within the soil of Northern Westchester. His father’s family has lived here for more than a century and his mother’s family is nearing that mark. He is proud that he was born in Peekskill and has lived and worked here all his life and, with his wife Nancy raised their two children here.
View all posts by Legislator John G. Testa →
This entry was posted in politics, Uncategorized and tagged arrest, cheating, Cortlandt Manor NY, debates, Democrats, election, fraud, government, John Testa, Nancy Vann, Peekskill NY, politics, westchester county board of legislators, Westchester County NY, Yorktown Heights NY. Bookmark the permalink.