Growing up in the 1960’s and 70’s, Walt Disney’s Wonderful World of Color (and then The

Wonderful World of Disney) was a staple every Sunday night on television. Every week we looked forward to Walt Disney himself introduce cartoons, historic features, programs and films, all in color beginning in 1961. Those of us who attended the 1964 New York World’s Fair saw Disney’s influence everywhere. Who could forget seeing the “It’s a Small World” installation in the pavilion hosting the Pepsi salute to UNICEF. Then, of course, there was “Great Moments with Mr. Lincoln,” the lifelike President Abraham Lincoln speaking to the audience. This was Disney’s first such ‘Audio-Animatronic’ figure that would eventually be expanded to a full “Hall of Presidents” at Disney’s theme parks.

So why did Disney select Lincoln as his first lifelike subject? Come to find out, Walt Disney had a lifelong connection to Mr. Lincoln. “Ever since I was a small boy in Illinois,” Disney once stated, “I have had a great personal admiration for Abraham Lincoln.” As a 5th grader, Walt used cardboard to create a stovepipe hat, his father’s coat and crepe hair to make himself an impressive looking Lincoln as he recited the perfectly memorized Gettysburg Address to his classmates. It was a performance he recreated every year until his graduation.

While planning for Disneyland in 1959 it was decided that a human Audio-Animatronic Lincoln would recreate a few of his historic speeches. Once Robert Moses, the force behind the NY World’s Fair, saw an early prototype of the Lincoln display he demanded it be included in the Fair. The development timetable for the Lincoln figure needed serious shortening in order to be ready for the “Great Moments with Mr. Lincoln” installation at

the Fair. The skillful artisans at Disney Studios and W.E.D. Enterprises in California used actual historic artifacts and original photos to craft the authentic Lincoln. They even used a Life Mask of Lincoln created by Leonard Volk in 1860. The advancement in recording technology was perfected for the movements of the figure. Engineers were required to create breakthroughs in the use of the hydraulic and pneumatic systems used for the physical movements of the figure. It was a long way from the centuries old animatronic devices that utilized clockwork movements to animate the figures.

Once the NY World’s Fair was over, the Lincoln figure was shipped back to California and “Great Moments with Mr. Lincoln” was opened on July 18, 1966. The lobby of the Lincoln exhibit at the Main Street Play House in Disneyland displayed mock-up recreations of Lincoln’s offices and historic Lincoln items. Once in the theater, the show featured a short film called “Two Brothers” discussing the story of two brothers who fought on both sides of the Civil War. The curtains then rose to reveal the moving and speaking Lincoln figure. 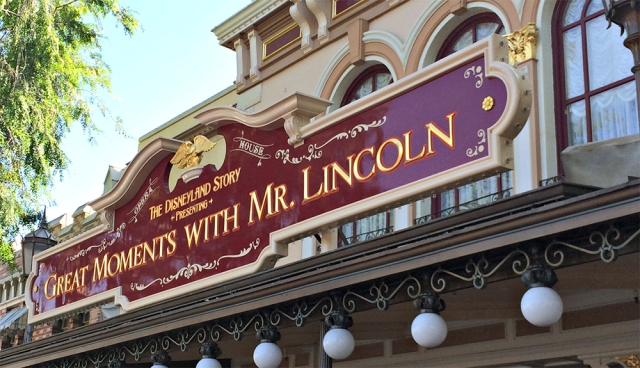 Walt Disney not only wanted to create a tribute to Lincoln but he saw “Great Moments with Mr. Lincoln” as a means to educate and bring history to life. Disney described it himself; “Most Americans will agree with me that no man has had more of a positive impact on a nation than Abraham Lincoln has on our country. He is venerated not only in our land but in many parts of the world. Yet I have always felt too few people realize that Lincoln’s concepts and philosophies are as useful, as necessary, as applicable today as they were when he pronounced them a century ago. His analysis of freedom and its true meaning, his approach to justice and equality, his own courage and strength all are as vital in the 1960’s as they were during the mid 1800’s.”

Former District 1 County Legislator, John G. Testa is served five terms at the Westchester County Board of Legislators, spending the last 3 terms as BOL Minority Leader. John G. Testa is a lifelong resident of Peekskill who first entered elected public service as a member of the Peekskill Common Council in 1998 and then served three terms as Mayor. He previously served on the Conservation and Parks Advisory Board and Zoning Board of Appeals. John became an elected official eager to improve the City in which his family has lived for more than a century and quickly earned a reputation as a strong, independent, nonpartisan voice for fiscal responsibility. John received a BS degree in Technology from SUNY Oswego, where his academic achievements gained him induction into Epsilon Pi Tau, the International Honorary Fraternity of Technology. He earned his MS degree in Technology from the City College of New York. He began his teaching career in 1980 at Peekskill High School, his alma mater, as an instructor in Technology and Social Studies, retiring in 2013 after 33 years teaching. John has been a leader in support for the Arts Community in Westchester. He presided over the construction of the Peekskill Art Lofts, the establishment of the Hudson Valley Center for Contemporary Art, and the complete restoration of the Paramount Center for the Arts, originally a 1930’s movie house and helped bring critical funding to many Westchester programs. Legislator Testa received the “Advancing the Arts in Westchester Award” by ArtsWestchester. John has a been a leader on environmental issues for two decades and has a long record of initiatives he has supported and spearheaded. His active involvement in developing and promoting environmentally friendly policies began as mayor and continued throughout his time as Westchester County Legislator. His efforts consistently earned John the endorsement of the NY League of Conservation Voters. John’s most recognizable accomplishment has been his promotion and preservation of local history and historic landmarks, bringing an unprecedented focus on the region’s rich history, and its legacy of historic Victorian architecture. His roots in historical preservation stem from his experience as a Revolutionary War re-enactor and member of The Brigade of the American Revolution for 50 years. John was instrumental in securing the preservation of the Lincoln Depot, now the Lincoln Depot Museum, where he now serves as President. The museum was recognized in 2015 as one of The Best Museums in Westchester. He also secured the preservation of historic Fort Hill as parkland, a 40-acre parcel that was originally a Revolutionary War encampment site. Under his leadership, the United States Dept. of the Interior declared Peekskill a “Preserve America Community.” John was able to establish a record number of National Register designations of local structures, including the first Downtown and Neighborhood Historic Districts and supported the preservation of the historic Miller House in North White Plains. In 2017 John was named a “Champion of History” by the Lincoln Society in Peekskill. John and his wife of 37 years, Nancy, live in Peekskill and have two adult children, John, Jr. (fiancé Courtney Kelly) and Katy (husband Mike Mearon). John and Nancy recently welcomed the arrival of their first grandchild, Lacey Mae, in 2019.
View all posts by John G. Testa →
This entry was posted in history, Uncategorized and tagged 1964, Abraham Lincoln, animatronics, Civil War, Disney World, Disneyland, Hall of Presidents, history, John Testa, Lincoln Depot Museum, Lincoln Society in Peekskill, NY Worlds Fair, Peekskill NY, Walt Disney, Westchester County NY. Bookmark the permalink.