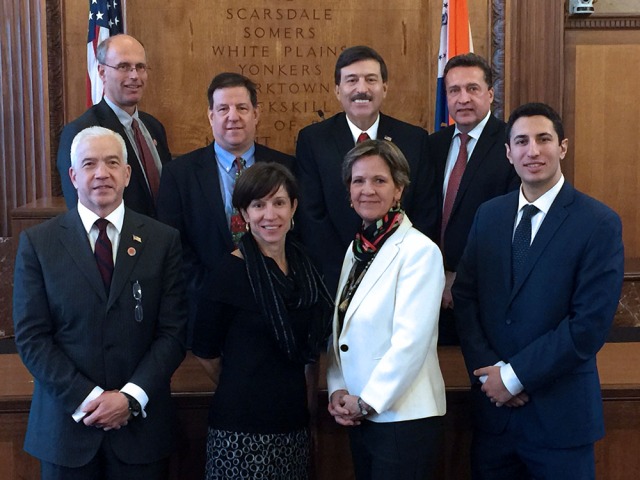 The seven Republican County Legislators and one Conservative member of the Westchester County Board of Legislators are proposing that a law be passed as quickly as possible that requires that any gun shows to be held at the Westchester County Center be mandated to follow the recommendations of the NY State Attorney General’s office from its “Model New York Gun Show Procedures.” While it appears that many gun shows across NY State are now following these procedures, the eight legislators believe that Westchester residents will feel more secure about having gun shows in our county if these clear and strict requirements are enshrined in law. If this law passes, Westchester County will have the strongest law regulating gun shows in NY State. Procedures this proposed law will require are:

1)  All guns brought into the gun show by private sellers are tagged so that, upon exiting, the operator can determine if guns were sold and that a proper background check was performed.

2)  Post conspicuous signs throughout the shows that give written notice to all dealers and lay out in online promotional materials that makes clear that New York State law requires that a National Instant Criminal Background Check (NICS) must be completed prior to all firearm sales or transfers, and it’s a crime not to do so.

3) Inform all gun show staff of the requirements of posting signs and conducting NICS and provide access to a dealer who is authorized to conduct a NICS at cost.

4) Limit the number of access doors at the show so that sellers and buyers have to enter and exit through an area where the NICS procedures can be monitored.

5) Use reasonable means, including police patrols, to prevent illegal gun sales outside of the building, including the parking lot, and have law enforcement at gun show to watch for illegal sales.

Vice Chair Jim Maisano stated, “I would expect quick passage of this legislation since it was developed after research and due diligence by Atty. Gen. Eric Schneiderman in working with the companies that run gun shows around New York. We believe that mandating the toughest regulations possible to ensure that gun shows follow all existing laws and that the safest procedures possible are followed is the right solution to deal with future gun shows at the Westchester County Center.”

Minority Leader John Testa stated, “The collaboration between show organizers and the NYS Attorney General has enabled gun shows to be successfully held across NY State. We can take an important step in Westchester that will preserve the Constitutional protections of citizens while assuring the public that a proven successful procedure for the event is in place. The GOP feels this is the best solution at this time.”

Minority Whip Gordon Burrows stated, “I fully support passing a law that sets forth clear guidelines to ensure that weapons sold at gun shows don’t find their way into the hands of felons, terrorists, the dangerously mentally ill and others that could not pass a background check. I believe our law is a win for both public safety and constitutional rights.”

Former District 1 County Legislator, John G. Testa is served five terms at the Westchester County Board of Legislators, spending the last 3 terms as BOL Minority Leader. John G. Testa is a lifelong resident of Peekskill who first entered elected public service as a member of the Peekskill Common Council in 1998 and then served three terms as Mayor. He previously served on the Conservation and Parks Advisory Board and Zoning Board of Appeals. John became an elected official eager to improve the City in which his family has lived for more than a century and quickly earned a reputation as a strong, independent, nonpartisan voice for fiscal responsibility. John received a BS degree in Technology from SUNY Oswego, where his academic achievements gained him induction into Epsilon Pi Tau, the International Honorary Fraternity of Technology. He earned his MS degree in Technology from the City College of New York. He began his teaching career in 1980 at Peekskill High School, his alma mater, as an instructor in Technology and Social Studies, retiring in 2013 after 33 years teaching. John has been a leader in support for the Arts Community in Westchester. He presided over the construction of the Peekskill Art Lofts, the establishment of the Hudson Valley Center for Contemporary Art, and the complete restoration of the Paramount Center for the Arts, originally a 1930’s movie house and helped bring critical funding to many Westchester programs. Legislator Testa received the “Advancing the Arts in Westchester Award” by ArtsWestchester. John has a been a leader on environmental issues for two decades and has a long record of initiatives he has supported and spearheaded. His active involvement in developing and promoting environmentally friendly policies began as mayor and continued throughout his time as Westchester County Legislator. His efforts consistently earned John the endorsement of the NY League of Conservation Voters. John’s most recognizable accomplishment has been his promotion and preservation of local history and historic landmarks, bringing an unprecedented focus on the region’s rich history, and its legacy of historic Victorian architecture. His roots in historical preservation stem from his experience as a Revolutionary War re-enactor and member of The Brigade of the American Revolution for 50 years. John was instrumental in securing the preservation of the Lincoln Depot, now the Lincoln Depot Museum, where he now serves as President. The museum was recognized in 2015 as one of The Best Museums in Westchester. He also secured the preservation of historic Fort Hill as parkland, a 40-acre parcel that was originally a Revolutionary War encampment site. Under his leadership, the United States Dept. of the Interior declared Peekskill a “Preserve America Community.” John was able to establish a record number of National Register designations of local structures, including the first Downtown and Neighborhood Historic Districts and supported the preservation of the historic Miller House in North White Plains. In 2017 John was named a “Champion of History” by the Lincoln Society in Peekskill. John and his wife of 37 years, Nancy, live in Peekskill and have two adult children, John, Jr. (fiancé Courtney Kelly) and Katy (husband Mike Mearon). John and Nancy recently welcomed the arrival of their first grandchild, Lacey Mae, in 2019.
View all posts by John G. Testa →
This entry was posted in government, politics, Uncategorized and tagged Cortlandt Manor NY, Gordon Burrows, government, gun shows, Jim Maisano, John Testa, Peekskill NY, politics, Westchester County Center, Westchester GOP Legislators, Yorktown Heights NY. Bookmark the permalink.