Yes, there was an approved Waterfront Redevelopment Plan for Peekskill! 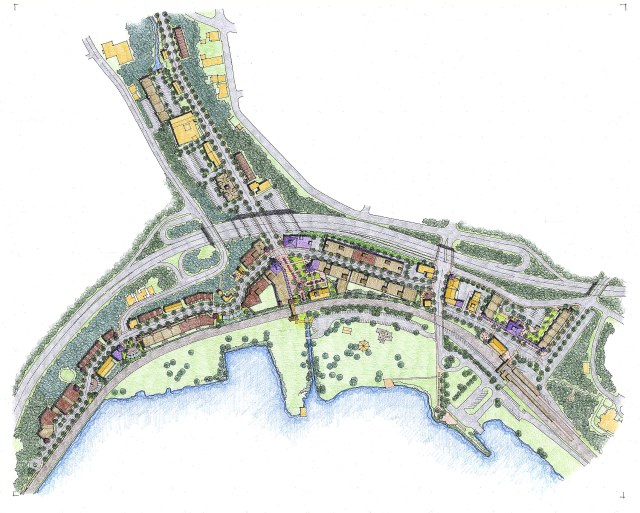 Quite a number of people have asked me about projects that we planned and approved when I was mayor but for some reason, were never completed. Many newer residents of Peekskill (over the last 7-8 years) were not here to know first hand the great projects that, if they were only allowed to become reality, would have transformed the City. Yes, despite a band of negative and political obstructionists, we were able to accomplish much and add important projects that, if stopped, would have had detrimental effects on the Peekskill of today. Imagine the financial condition of Peekskill without the tax benefits from Chapel Hill, Riverbend, Applewood, Buena Vista and Oakwood Drive developments, Kossuth Place and Maple Avenue subdivisions, Frost Lane Estates and Delancy Avenue homes, just to name just a few. Well, if a few people on the Common Council had their way back between 2002-07 these projects would have been disapproved. The City would have been deprived of millions of dollars in tax revenue. Not to mention some wonderful residents.

On the other hand, I guess the Foster Administration that followed wouldn’t have had the $11 million of fund balance there to waste away. Lol.

These projects (and many others not mentioned above) were important for more than just the tax windfall and the ability to have a 0% tax increase 3 years in a row while also building up that tremendous fund balance. They were important because they put Peekskill on the map, got us noticed in regional and national publications and made Peekskill a new horizon for serious retail interest. This is where the administration that followed mine totally didn’t get it. They didn’t understand the concept of business or major retail organizations. Businesses need customers, and ones with disposable income. These projects and others did that. How do we know? Because they told us and came to us to bring major retail to Peekskill; Target and Lowe’s being the most prominent.

I have been asked about the Target proposal over and over again especially in election years like this one. I’ll get to that story in a future post. This post is about a major project that was approved at Waterfront 10 years ago that should have been supported by the Foster Administration. Sadly, as usual, misinformation, politics and lies prevailed and what was a well-planned and landmark project that would have made the waterfront, Peekskill’s jewel and its most important physical asset, a focal point and compliment to the downtown. Luckily, Mayor Catalina and Council Members Vesce and Torres agree with this approach and are supporting new businesses and projects and especially, people with great ideas and money they wish to invest. Mayor Catalina believes, like I did, how beneficial it is to have private investment and use other people’s money to improve Peekskill whenever possible and not subscribe to the Foster Administration’s mantra of “if it’s not paid for by the taxpayers we don’t want it.”

So, the Ginsburg Waterfront Plan:

It is important to understand, as I pointed out earlier, this project was proposed “at the waterfront,” not “on the waterfront.” This is an important distinction because the council opposition and the Democratic Party minions did their best to trick members of the public into thinking the plan was to take the place of the Riverfront Green. In fact the entire plan was located on the eastern side of the track along Railroad Avenue, Water Street and Central Avenue. As usual, scare tactics were used to try and make residents think the green was being “given away” to an “evil developer.”

Of course none of that was true.

We held a series of public outreach events, including a large one at the Paramount where we could present the preliminary plan of the project and get valuable public input as well as dispel the terrible lies and tactics being used by those politically against the improvements.

The plan was well received by the public and over time the draft plan was modified to accommodate suggestions and concerns by the public. The developer even agreed to dedicate 10% of the residential units as Affordable Housing.  A number of ‘pocket parks’ were planned in between the housing areas and an important link to the downtown was highlighted by Central Avenue additions in order to link the new project with the business district and make the project a win-win for the downtown business owners. 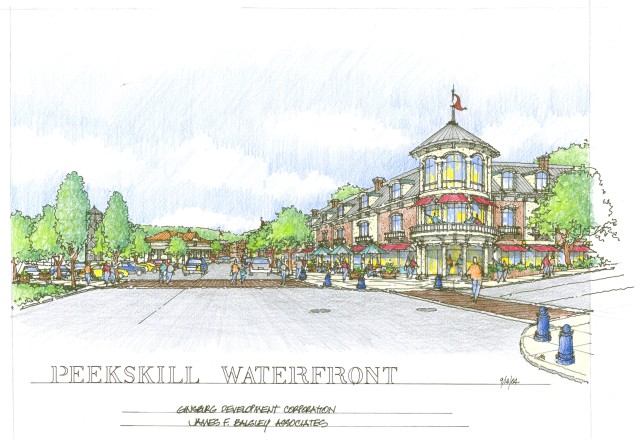 Looking up Railroad Avenue with the train station to the left. This parking structure was totally disguised and added retail shops on the street level and a promenade and restaurant on the top level at the same elevation as Lower South Street.

The plan wasn’t all about residential. Yes, the final proposal had roughly 315 units but it also had a very unique parking structure that was totally disguised with a façade of retail stores/shops and a promenade that was accessed via Lower South Street with a rooftop restaurant.  It was an exciting idea. 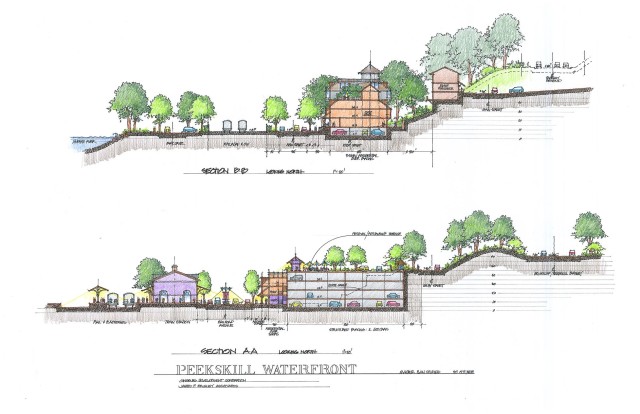 This is a cross-sectional view of the parking structure showing the ‘hidden’ parking and the street level promenade. It also shows a sample residential structure planned for the north end of Water Street. 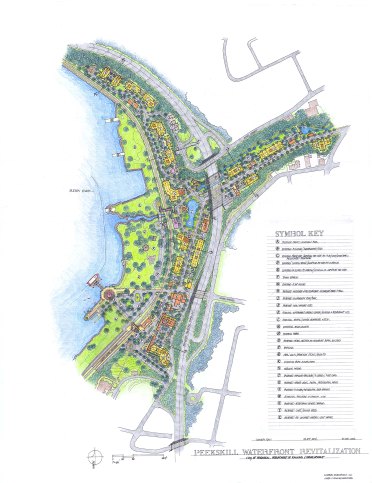 This is a more detailed version showing the individual components of the plan along Railroad Ave. and Water Street as well as Central Avenue to the right.

The project could have been built in stages and at the same time included extensive infrastructure improvements for the City, including sewer upgrades, road straightening and redevelopment and sidewalks. Governor Pataki liked the idea so much we were able to obtain $8 million in grants from NY State. Believe it or not much of these funds are still unspent because of the foolish acts of the Foster Administration over the subsequent years. Luckily, they were not reclaimed by the state agencies that granted them and thanks to Mayor Catalina they are now being applied to projects they were obtained for such as Peekskill Landing, the Lower Riverfront redevelopment near the boat dock and the Southern Waterfront Walkway. Projects all planned before the Foster Administration took office and finally moved ahead by Mayor Catalina. 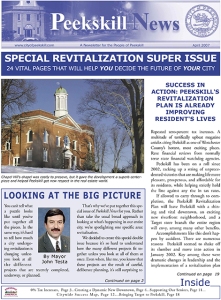 With the right leadership and members of government the City of Peekskill has much more to accomplish. We are coming out of the 6+ years of stalled or outright prevention of previously approved projects and plans. The momentum was stopped and the City’s finances went into the toilet. $11 million in fund balance was spent with nothing to show for it and the word among investors was to stay away from Peekskill because they were too difficult and against serious projects. Since Mayor Catalina and his team have taken office things are starting to turn around and serious investment is coming back because investors know they are wanted and once again want to be a part of a Peekskill’s track to success and prosperity. We just need to make sure those we elect feel the same way. I look forward to helping Mayor Catalina and like-minded Council members move Peekskill forward in a positive and productive way.

To get a full understanding of the progress we made and the projects that were on the horizon back in 2007 please read this Special Development Issue we sent to the residents of the City at the time.

John G. Testa, a life-long resident of Peekskill, began his first term on the Westchester County Legislature in January 2010. Prior to his successful run for the District 1 Legislative seat, he served 3 terms as Mayor of Peekskill from January 2002 until December 2007. Before becoming mayor he also served a four-year term as a Councilman. From his first days in office Testa worked tirelessly to set the City on the path of economic stability. Peekskill flourished under this plan, increasing the city fund balance to its highest in history. During John’s tenure in office, the NY State Comptroller’s Office named Peekskill one of the most fiscally sound municipalities in the State; independent auditors proclaimed Peekskill as being in its best fiscal condition in over 30 years; and Moody’s Investor Service agreed to upgrade its bond rating, resulting in further savings. The plan he put in place was so successful that it enabled the City of Peekskill to pass three budgets in a row with a 0% tax increase. These fiscal skills will prove valuable to Testa as he works to put the brakes on what has been wildly escalating county spending and unchecked government growth. He has pledged his efforts to work to consolidate services, eliminate wasteful spending and improve efficiency. In addition to the fiscal conservatism that served Peekskill so well, Testa worked to promote the city, attracting investment, jobs and an increased tax base. Over $100 million of private investment came to Peekskill in the forms of new residential construction, retail space, and the redevelopment of historic structures. As Mayor, Testa led a successful battle to stop the unfair and unsafe plan to send sewage to the Peekskill plant from outside the sewage/water district. John’s roots are deep within the soil of Northern Westchester. His father’s family has lived here for more than a century and his mother’s family is nearing that mark. He is proud that he was born in Peekskill and has lived and worked here all his life and, with his wife Nancy raised their two children here.
View all posts by Legislator John G. Testa →
This entry was posted in government, politics, Uncategorized and tagged affordable housing, budget, election, Frank Catalina, government, John Testa, Peekskill NY, taxes, waterfront redevelopment, Westchester County NY. Bookmark the permalink.