Republicans on the Westchester County Board of Legislators were today speaking highly of County Executive Rob Astorino’s State of The County Address, most especially his continuing to hold the line on county taxes, keeping spending in check as well as fostering responsible parenting and promoting business in Westchester.

Said Minority Leader John Testa (R-Peekskill), “Rob has been consistent in his mission to ease the burden on Westchester taxpayers. Many can relate to his line about not being broke, but not having a penny to spare. That really does apply to the county as well as so many of her residents. With all the unfunded mandates coming down from Albany, can you imagine where we’d be without the leadership of this County Executive?” 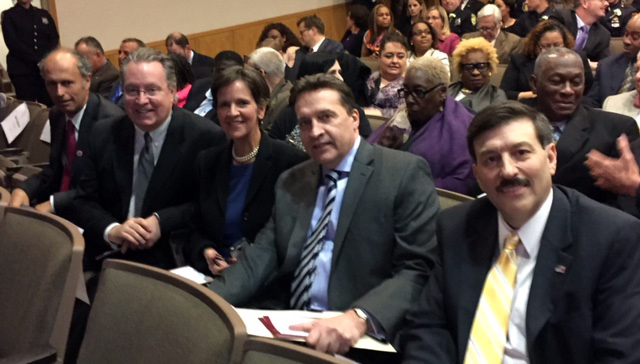 Vice Chair of the Board Republican Jim Maisano of New Rochelle said, “Rob did an excellent job articulating the challenges facing our county, and explaining that we must address them in the most fiscally responsible manner possible.” 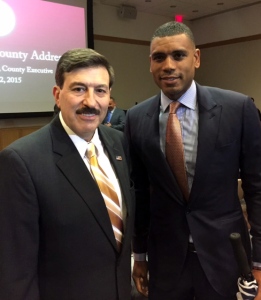 Westchester County Center for a day of seminars and fellowship with the help of service organizations and faith-based groups. The day was spearheaded by Astorino and his Department of Social Services headed up by Commissioner Kevin McGuire and his Deputy Joe Kenner. Former New York Knick Allan Houston will team up with Astorino’s Fatherhood Initiative via his own foundation going forward.

Said Legislator David Gelfarb (R-Rye Brook), “It was so inspiring to see what a rousing success the Fatherhood Initiative was. It’s quite apparent that we have a compassionate forward-thinking County Executive in Rob Astorino. He’s also tough when he needs to be. It does Westchester a world of good when he defends us from accusations of exclusionary zoning. That’s offensive, and just plain not true. Good for him.”

Michael Smith, legislator from Mount Pleasant said, “The State of the County address evidenced yet again why Rob Astorino was elected twice in a 2-1 Democratic county. He is a pragmatic leader with a strong social conscience. Furthermore, when he stands up to an overreaching federal government, and refuses to let social engineers run roughshod over our local zoning, he shows he’s principled in his determination to preserve home rule. Westchester County is very fortunate to have Rob as its county executive.”

Astorino took pride in his standing up to what he called “…an aggressive and overreaching federal government” when he challenged yet again the Department of Housing and Urban Development’s claims of racial discrimination and exclusionary practices in Westchester.

The County Executive also announced the opening of  the Westchester Economic Development office in Manhattan across from Grand Central Terminal. 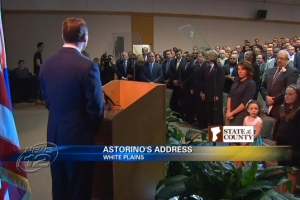 Legislator Sheila Marcotte (R-Eastchester) said, “Its one thing to just say you’re going to attract business to the county, it’s another thing entirely to be proactive and go get the businesses. Opening up an office in New York City is a brilliant idea, and I’m proud of our County Executive for showing some initiative.”

Legislator Gordon Burrows of Yonkers said, “Of course its great to keep taxes down; that’s a must. But Rob knows that in order to actually grow the economy and create jobs, you have to create an environment which does so. That’s a positive role for government to play.”

Yonkers Legislator Bernice Spreckman said, “Westchester taxpayers -especially seniors- are suffocating under the weight of massive unfunded mandates from Albany. It is an affront when a senior citizen who owns their home outright has to move out because they can’t pay their property taxes. By keeping taxes stable County Executive Astorino has once again kept his promise to give taxpayers a fighting chance. His Fatherhood Initiative is a breath of fresh air, and will no doubt have a positive impact on the lives of thousands of men and their families. Speaking of children, I hope the new deal for Playland provides summer memories for generations to come.”

Former District 1 County Legislator, John G. Testa is served five terms at the Westchester County Board of Legislators, spending the last 3 terms as BOL Minority Leader. John G. Testa is a lifelong resident of Peekskill who first entered elected public service as a member of the Peekskill Common Council in 1998 and then served three terms as Mayor. He previously served on the Conservation and Parks Advisory Board and Zoning Board of Appeals. John became an elected official eager to improve the City in which his family has lived for more than a century and quickly earned a reputation as a strong, independent, nonpartisan voice for fiscal responsibility. John received a BS degree in Technology from SUNY Oswego, where his academic achievements gained him induction into Epsilon Pi Tau, the International Honorary Fraternity of Technology. He earned his MS degree in Technology from the City College of New York. He began his teaching career in 1980 at Peekskill High School, his alma mater, as an instructor in Technology and Social Studies, retiring in 2013 after 33 years teaching. John has been a leader in support for the Arts Community in Westchester. He presided over the construction of the Peekskill Art Lofts, the establishment of the Hudson Valley Center for Contemporary Art, and the complete restoration of the Paramount Center for the Arts, originally a 1930’s movie house and helped bring critical funding to many Westchester programs. Legislator Testa received the “Advancing the Arts in Westchester Award” by ArtsWestchester. John has a been a leader on environmental issues for two decades and has a long record of initiatives he has supported and spearheaded. His active involvement in developing and promoting environmentally friendly policies began as mayor and continued throughout his time as Westchester County Legislator. His efforts consistently earned John the endorsement of the NY League of Conservation Voters. John’s most recognizable accomplishment has been his promotion and preservation of local history and historic landmarks, bringing an unprecedented focus on the region’s rich history, and its legacy of historic Victorian architecture. His roots in historical preservation stem from his experience as a Revolutionary War re-enactor and member of The Brigade of the American Revolution for 50 years. John was instrumental in securing the preservation of the Lincoln Depot, now the Lincoln Depot Museum, where he now serves as President. The museum was recognized in 2015 as one of The Best Museums in Westchester. He also secured the preservation of historic Fort Hill as parkland, a 40-acre parcel that was originally a Revolutionary War encampment site. Under his leadership, the United States Dept. of the Interior declared Peekskill a “Preserve America Community.” John was able to establish a record number of National Register designations of local structures, including the first Downtown and Neighborhood Historic Districts and supported the preservation of the historic Miller House in North White Plains. In 2017 John was named a “Champion of History” by the Lincoln Society in Peekskill. John and his wife of 37 years, Nancy, live in Peekskill and have two adult children, John, Jr. (fiancé Courtney Kelly) and Katy (husband Mike Mearon). John and Nancy recently welcomed the arrival of their first grandchild, Lacey Mae, in 2019.
View all posts by John G. Testa →
This entry was posted in government, Uncategorized and tagged Allan Houson, City of Peekskill, Cortlandt Manor NY, GOP, government, John Testa, politics, Rob Astorino, State of the County, Westchester County NY, Yorktown Heights NY. Bookmark the permalink.