PEEKSKILL, NY — With a “you are there” intensity, two days of ceremonies, honors and

tributes taking place on the exact 150th anniversary of Abraham Lincoln’s death and the location his funeral train passed is taking place on Saturday, April 25th and Sunday the 26th at The Lincoln Depot Museum at 10 South Water Street in Peekskill, NY. Adding to the event’s intensity will be an historically exact replica of the martyred president’s coffin made by Batesville Casket Company.

The coffin will be on display at the Lincoln Depot Museum from 1-4 pm each day. There will be a nominal $5 attendance fee. Museum members will get in free. Specific highlights will include speeches each day at 2:30 pm:

In 1861, Abraham Lincoln made his only stop in Westchester at The Lincoln Depot. The trip was part of Lincoln’s little known-but momentous whistle stop train trip to his inauguration. Over the course of the 1,600 mile trip, Lincoln stopped at scores of places and gave many brief speeches. It is estimated that on that trip, Lincoln was seen by more people than had ever witnessed an American president in history, and that the voyage itself played an important role in mobilizing public opinion for the trials to come. In April, 1865, the funeral train carrying his remains followed the same 1,600-mile route home, and had a huge impact as well.

The Lincoln Depot Museum is one of the only intact sites of the scores where Lincoln stopped and spoke on his way to and back from Washington. A multi-million-dollar facility, the 160-year-old building features an abundance of exhibits, including period Lincoln photographs, letters signed by Lincoln and Civil War era artifacts and ephemera. The event is being held by the Lincoln Depot Museum in cooperation with The Lincoln Society in Peekskill, NY.

“Trains have been rolling down these tracks for 165 years. You can stand at the Depot and 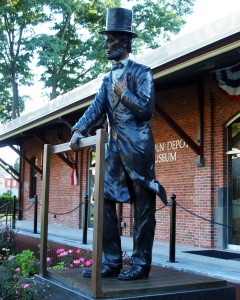 get a true and magnificent sense of what it was like to actually be present so long ago,” says Westchester County Legislator John Testa. As a City Councilman and, later, Mayor of Peekskill, Testa led the effort to purchase the Lincoln Depot Building and the property upon which it rested. He worked with then Governor George Pataki to secure more than $3 million in funds to transform what had become a leaky, neglected warehouse into a state-of-the art educational museum facility that would serve not just the city, but the entire region.

“Few people realize that Westchester County is one of America’s most historic regions,” Testa says. From the Colonial Era to the Revolutionary War to the Civil War and the present, amazing things have happened in this county.”

Plans are for the Lincoln Depot Museum to be a catalyst for heritage tourism and historic preservation for the entire region. Members of area historic groups are already thrilled about the fact that they’ll soon have a new place to meet and stage events.

Founded in 1903, The Lincoln Society in Peekskill is considered the oldest Lincoln Society of its kind. Recent speakers have included Pulitzer Prize winners Eric Foner and Debbie Applegate, as well as James McPherson, renown author of The Battle Cry of Freedom.

Lincoln’s connection to Peekskill grew out of the city’s status as a center of 19th-century manufacturing and the intensive political activity of many of its leading citizens in that era. He was invited to stop in the city by local luminary William Nelson, who served in Congress with Lincoln from 1846-1848.

This event marks the official opening of the Lincoln Depot Museum for the 2015 season and will be its first full year in operation. The museum will be open Saturdays and Sundays until December 19-20, 2015.

For more information, contact John G. Testa at 914-760-9773, or go to the organization’s web site at www.lincolndepotmuseum.org.

Former District 1 County Legislator, John G. Testa is served five terms at the Westchester County Board of Legislators, spending the last 3 terms as BOL Minority Leader. John G. Testa is a lifelong resident of Peekskill who first entered elected public service as a member of the Peekskill Common Council in 1998 and then served three terms as Mayor. He previously served on the Conservation and Parks Advisory Board and Zoning Board of Appeals. John became an elected official eager to improve the City in which his family has lived for more than a century and quickly earned a reputation as a strong, independent, nonpartisan voice for fiscal responsibility. John received a BS degree in Technology from SUNY Oswego, where his academic achievements gained him induction into Epsilon Pi Tau, the International Honorary Fraternity of Technology. He earned his MS degree in Technology from the City College of New York. He began his teaching career in 1980 at Peekskill High School, his alma mater, as an instructor in Technology and Social Studies, retiring in 2013 after 33 years teaching. John has been a leader in support for the Arts Community in Westchester. He presided over the construction of the Peekskill Art Lofts, the establishment of the Hudson Valley Center for Contemporary Art, and the complete restoration of the Paramount Center for the Arts, originally a 1930’s movie house and helped bring critical funding to many Westchester programs. Legislator Testa received the “Advancing the Arts in Westchester Award” by ArtsWestchester. John has a been a leader on environmental issues for two decades and has a long record of initiatives he has supported and spearheaded. His active involvement in developing and promoting environmentally friendly policies began as mayor and continued throughout his time as Westchester County Legislator. His efforts consistently earned John the endorsement of the NY League of Conservation Voters. John’s most recognizable accomplishment has been his promotion and preservation of local history and historic landmarks, bringing an unprecedented focus on the region’s rich history, and its legacy of historic Victorian architecture. His roots in historical preservation stem from his experience as a Revolutionary War re-enactor and member of The Brigade of the American Revolution for 50 years. John was instrumental in securing the preservation of the Lincoln Depot, now the Lincoln Depot Museum, where he now serves as President. The museum was recognized in 2015 as one of The Best Museums in Westchester. He also secured the preservation of historic Fort Hill as parkland, a 40-acre parcel that was originally a Revolutionary War encampment site. Under his leadership, the United States Dept. of the Interior declared Peekskill a “Preserve America Community.” John was able to establish a record number of National Register designations of local structures, including the first Downtown and Neighborhood Historic Districts and supported the preservation of the historic Miller House in North White Plains. In 2017 John was named a “Champion of History” by the Lincoln Society in Peekskill. John and his wife of 37 years, Nancy, live in Peekskill and have two adult children, John, Jr. (fiancé Courtney Kelly) and Katy (husband Mike Mearon). John and Nancy recently welcomed the arrival of their first grandchild, Lacey Mae, in 2019.
View all posts by John G. Testa →
This entry was posted in history, Uncategorized and tagged Civil War, history, John Testa, Lincoln Depot Museum, Peekskill NY, Westchester County NY. Bookmark the permalink.