Republican Minority Leader of the Westchester County Board of Legislators, John G. Testa (Cortlandt, Peekskill, Yorktown) today called upon his Legislative colleagues to stand with their local municipalities and reject any attempt to have the Legislature adopt the latest report of the HUD appointed Federal Monitor in the in the ongoing Housing Settlement.

“The Monitor’s report is riddled with inaccuracy, inconsistency and injustice,” said Testa. “It fails to accurately count housing zones that permit town houses as multifamily; it lacks consistency in its analysis since some municipalities with existing multifamily zones are given a clean bill of health while others similarly situated are not. This arbitrary and non-objective approach by HUD and the Monitor to the process is preventing a resolution to the issues in contention regarding the settlement.”

Legislator Michael Smith voiced concern about comments the Monitor made at the September 10, 2014 Board of Legislators meeting regarding the 25 municipalities not specifically cited as failing his “test” if a municipality has “prima facia” exclusionary zoning.

“Even though 25 municipalities are deemed not exclusionary in their zoning, the Monitor’s report fails to give them a clean bill of health,” said Legislator Smith. “There were some “should do” and “should consider” for those 25 and the Monitor did not rule out that those municipalities wouldn’t be asked to make changes in the future.  The Monitor declared that determination would be left to HUD.”

Legislator and GOP Minority Whip Gordon Burrows noted that the Federal funds at risk, the so-called CDBG funds, are limited and have minimal impact on the 31 municipalities that are the subject of the Monitor’s report and are part of the Housing Settlement.

“Why should the 31 eligible municipalities sell out Home Rule for less than an average of $10,000 per jurisdiction,” said Legislator Burrows. “HUD shouldn’t be punishing any municipality, but even more egregious is punishing the municipalities that are not party to the suit. Most of the money HUD is withholding was promised to communities that have nothing to do with the settlement.”

Legislator David Gelfarb represents two of the communities that were cited by the Monitor.  “I completely reject the preliminary findings which claim that Harrison and Rye Brook engage in exclusionary zoning practices.  In his report, the Monitor says of and Rye Brook’s multi-family zoning districts are located in areas that are ‘…clearly less desirable and could be considered stigmatizing’.    This characterization is arbitrary and completely inaccurate. The Monitor makes similar baseless statements about Harrison in the report” Gelfarb said. “Both of these communities are extremely welcoming and have ample supply of affordable rental, 2 family and single family homes and the ability to develop future housing that will continue to encourage a robust and diverse community.” 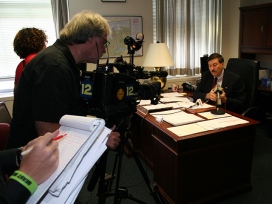 Legislator Sheila Marcotte points the finger for the loss of federal funds squarely at the
County’s Congressional Delegation.

“The real culprit here is not Westchester County or our municipalities – it is HUD and the lack of action by our Federal Delegation,” stated Legislator Marcotte.  “Our representatives in Congress should be demanding HUD release the CDBG funds at a minimum to the municipalities who are not involved with the Housing Settlement.”

“Not one of the municipalities were party to the Housing Settlement, so why is this expense, and unfair burden, now being placed on them to defend their zoning – zoning which one person (a HUD appointed Federal Monitor) claims is exclusionary,” said Legislator Marcotte.

The caucus is calling upon the County Board to adopt a resolution demanding the federal delegation take action to have HUD accept the County’s findings in its series of Analysis of Impediments and to remove the burden on the local government. The caucus members also continue their demand that HUD release the CDBG funds to the 25 communities deemed non exclusionary in their zoning and not mentioned in either of the Monitor’s reports as well as those communities that were never targeted in the settlement in the first place. HUD must stop the arbitrary decision-making that hurts Westchester’s communities.

John G. Testa, a life-long resident of Peekskill, began his first term on the Westchester County Legislature in January 2010. Prior to his successful run for the District 1 Legislative seat, he served 3 terms as Mayor of Peekskill from January 2002 until December 2007. Before becoming mayor he also served a four-year term as a Councilman. From his first days in office Testa worked tirelessly to set the City on the path of economic stability. Peekskill flourished under this plan, increasing the city fund balance to its highest in history. During John’s tenure in office, the NY State Comptroller’s Office named Peekskill one of the most fiscally sound municipalities in the State; independent auditors proclaimed Peekskill as being in its best fiscal condition in over 30 years; and Moody’s Investor Service agreed to upgrade its bond rating, resulting in further savings. The plan he put in place was so successful that it enabled the City of Peekskill to pass three budgets in a row with a 0% tax increase. These fiscal skills will prove valuable to Testa as he works to put the brakes on what has been wildly escalating county spending and unchecked government growth. He has pledged his efforts to work to consolidate services, eliminate wasteful spending and improve efficiency. In addition to the fiscal conservatism that served Peekskill so well, Testa worked to promote the city, attracting investment, jobs and an increased tax base. Over $100 million of private investment came to Peekskill in the forms of new residential construction, retail space, and the redevelopment of historic structures. As Mayor, Testa led a successful battle to stop the unfair and unsafe plan to send sewage to the Peekskill plant from outside the sewage/water district. John’s roots are deep within the soil of Northern Westchester. His father’s family has lived here for more than a century and his mother’s family is nearing that mark. He is proud that he was born in Peekskill and has lived and worked here all his life and, with his wife Nancy raised their two children here.
View all posts by Legislator John G. Testa →
This entry was posted in Uncategorized and tagged Cortlandt Manor NY, John Testa, Peekskill NY, Westchester CDBG Funds, Westchester County, westchester county board of legislators, Westchester GOP Legislators, Westchester Housing Settlement, Yorktown NY. Bookmark the permalink.