As I start my third term on the Westchester County Board of Legislators I am beginning a new role: my colleagues have elected me the Minority Leader for the GOP Caucus. It is a position I take very seriously and one I look forward to working hard at. Joining me on the leadership team as Whip is Legislator Gordon Burrows of Yonkers. Gordon has been the GOP Caucus Whip for the last four years and I look forward to working closely with him over the next two years.

The position of Minority Leader carries many responsibilities.  In addition to the role as floor leader for the caucus during Board of Legislator meetings the minority leader represents the caucus in leadership meetings with the administration, public events and speaks for the caucus positions on issues.

My previous experience in government has prepared me well for this new position. Having

been a county legislator for the past four years has given me the experience on the issues going forward but the three terms spent as the Mayor of Peekskill gives me the executive and administrative experience that will prove important. I also retired from my teaching position last June after a 33-year career. Having the time to devote to the Minority Leader position is essential to success.

I have the advantage of having the outgoing Minority Leader, Jim Maisano, continue on 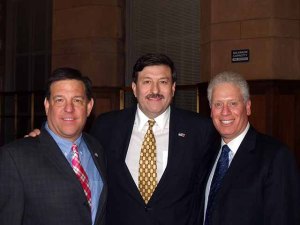 the board in his new position as Vice Chairman. Also, my predecessor as District 1 Legislator, George Oros, now serves as the Chief of Staff to the County Executive. So I have two of the best sources of advise and support I could ever ask for right at my fingertips.

As the term progresses I look forward to what the future holds as my tenure as Minority Leader unfolds. I am lucky to have six outstanding colleagues to work with in the GOP caucus but I also look forward to working will all legislators to focus on the needs of the people of Westchester County.

Former District 1 County Legislator, John G. Testa is served five terms at the Westchester County Board of Legislators, spending the last 3 terms as BOL Minority Leader. John G. Testa is a lifelong resident of Peekskill who first entered elected public service as a member of the Peekskill Common Council in 1998 and then served three terms as Mayor. He previously served on the Conservation and Parks Advisory Board and Zoning Board of Appeals. John became an elected official eager to improve the City in which his family has lived for more than a century and quickly earned a reputation as a strong, independent, nonpartisan voice for fiscal responsibility. John received a BS degree in Technology from SUNY Oswego, where his academic achievements gained him induction into Epsilon Pi Tau, the International Honorary Fraternity of Technology. He earned his MS degree in Technology from the City College of New York. He began his teaching career in 1980 at Peekskill High School, his alma mater, as an instructor in Technology and Social Studies, retiring in 2013 after 33 years teaching. John has been a leader in support for the Arts Community in Westchester. He presided over the construction of the Peekskill Art Lofts, the establishment of the Hudson Valley Center for Contemporary Art, and the complete restoration of the Paramount Center for the Arts, originally a 1930’s movie house and helped bring critical funding to many Westchester programs. Legislator Testa received the “Advancing the Arts in Westchester Award” by ArtsWestchester. John has a been a leader on environmental issues for two decades and has a long record of initiatives he has supported and spearheaded. His active involvement in developing and promoting environmentally friendly policies began as mayor and continued throughout his time as Westchester County Legislator. His efforts consistently earned John the endorsement of the NY League of Conservation Voters. John’s most recognizable accomplishment has been his promotion and preservation of local history and historic landmarks, bringing an unprecedented focus on the region’s rich history, and its legacy of historic Victorian architecture. His roots in historical preservation stem from his experience as a Revolutionary War re-enactor and member of The Brigade of the American Revolution for 50 years. John was instrumental in securing the preservation of the Lincoln Depot, now the Lincoln Depot Museum, where he now serves as President. The museum was recognized in 2015 as one of The Best Museums in Westchester. He also secured the preservation of historic Fort Hill as parkland, a 40-acre parcel that was originally a Revolutionary War encampment site. Under his leadership, the United States Dept. of the Interior declared Peekskill a “Preserve America Community.” John was able to establish a record number of National Register designations of local structures, including the first Downtown and Neighborhood Historic Districts and supported the preservation of the historic Miller House in North White Plains. In 2017 John was named a “Champion of History” by the Lincoln Society in Peekskill. John and his wife of 37 years, Nancy, live in Peekskill and have two adult children, John, Jr. (fiancé Courtney Kelly) and Katy (husband Mike Mearon). John and Nancy recently welcomed the arrival of their first grandchild, Lacey Mae, in 2019.
View all posts by John G. Testa →
This entry was posted in government, Uncategorized and tagged Cortlandt Manor NY, government, John Testa, leadership, Minority Leader, Peekskill NY, Westchester County, westchester county board of legislators, Yorktown NY. Bookmark the permalink.

2 Responses to Testa Chosen As Minority Leader of Westchester BOL