Strange How These Things Happen

Spring has always been a trigger for me to try and clean out the piles of stuff I accumulate year after year. I am not a pack rat but I do try and save things, more for sentimental reasons than anything else.

As I was going through some old boxes the other day I came across an item I haven’t seen in decades – an advertisement for a Revolutionary War Documentary I was part of for the Bicentennial in 1976.

Many of you may know that since 1969 at the age of 11, I have been part of an organization called The Brigade of the American Revolution (BAR), the only authentic and best known living history group established depicting the 18th century and the Revolutionary War period. It was what started my interest in studying and understanding history – not just military history or the dates things happened but the general day-to-day “life and times” of an era, which is why living history is such an important aspect of teaching history. 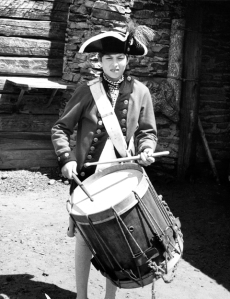 American Revolution Bicentennial came around I was well into becoming a “regular” soldier in the 1st New York Regiment. Our base of operations centered around the New Windsor Cantonment near Newburgh, where the famous address Washington gave to his fellow officers took place toward the true ending of the war in 1783. Other units were located around most of the northeastern states and grew to large numbers during this time.

For those who remember 1976 the focus on the Bicentennial was inescapable. As “The” group authentically depicting the Revolutionary War period we were in particularly high demand to participate in various events. Every weekend there were re-enactments of battles or encampments at every conceivable historic site in the northeast and as far west as Ohio.

Among the requests we received was to participate in numerous documentaries and, later on, even feature films. Among them was a documentary by the NY State Bicentennial Commission entitled “Don’t Tread on Me! Voices from the American Revolution” by the well-known producer Jack Ofield. When the movie came out during the Bicentennial I was shocked to see that whoever designed the poster advertising the film used my photo as the feature image! Needless to say, as a teenager, it was very cool to see. My family, of course, thought it was cool too.

When I found the poster it brought back many memories. I thought, hey this deserves a Google search. Could the film still be available? I never saw it by the way, so I thought it would be fun to look. My search led me to Jack Ofield’s website which advertises his numerous films and artwork. As I scrolled down through his films and descriptions, lo and behold, there was “Don’t Tread on Me!” …and… wait, the cover of the DVD once again had a photo of me from the film! This time it was a different photo from the original poster and one of me pointing my musket toward the camera.  The site describes the film as 28 minutes long and indicates it is “excerpted from the PBS one-hour special.”  So it is not the full original version but at least it is still available in some form.

Yes, I ordered it and am looking forward to watching it when it arrives to see how much of the footage from the BAR is included.

Of all the films I participated in over the last 43 years this will be the first documentary I will actually get to watch. In 1985 I was involved in a feature produced by Alan Alda called “Sweet Liberty.” Our parts were filmed on Long Island and became a central part of the film since the movie is about the Battle of Cowpens, a lesser-known battle that took place in South Carolina in January of 1781. Another film the BAR contributed to was Mel Gibson’s “The Patriot” in 2000. Unfortunately I was unable to dedicate the time to participate in the film due to my schedule but many of my friends were part of the movie.

As many of you know, I have been very involved with the restoration of Peekskill’s original railroad depot and establishment of the Lincoln Depot Museum and the Civil War connections to Peekskill and the region. Another project I have been supporting is the creation of the Battle of Pines Bridge Memorial in Yorktown that will commemorate and honor those involved in the Revolutionary War event from 1781. In fact just this past week I attended a wonderful fundraising event for the monument. It is great to be able to once again be involved in a Revolutionary War related project.

The very next day is when I came across the poster for the documentary that inspired this post. It is strange how these things happen!

Former District 1 County Legislator, John G. Testa is served five terms at the Westchester County Board of Legislators, spending the last 3 terms as BOL Minority Leader. John G. Testa is a lifelong resident of Peekskill who first entered elected public service as a member of the Peekskill Common Council in 1998 and then served three terms as Mayor. He previously served on the Conservation and Parks Advisory Board and Zoning Board of Appeals. John became an elected official eager to improve the City in which his family has lived for more than a century and quickly earned a reputation as a strong, independent, nonpartisan voice for fiscal responsibility. John received a BS degree in Technology from SUNY Oswego, where his academic achievements gained him induction into Epsilon Pi Tau, the International Honorary Fraternity of Technology. He earned his MS degree in Technology from the City College of New York. He began his teaching career in 1980 at Peekskill High School, his alma mater, as an instructor in Technology and Social Studies, retiring in 2013 after 33 years teaching. John has been a leader in support for the Arts Community in Westchester. He presided over the construction of the Peekskill Art Lofts, the establishment of the Hudson Valley Center for Contemporary Art, and the complete restoration of the Paramount Center for the Arts, originally a 1930’s movie house and helped bring critical funding to many Westchester programs. Legislator Testa received the “Advancing the Arts in Westchester Award” by ArtsWestchester. John has a been a leader on environmental issues for two decades and has a long record of initiatives he has supported and spearheaded. His active involvement in developing and promoting environmentally friendly policies began as mayor and continued throughout his time as Westchester County Legislator. His efforts consistently earned John the endorsement of the NY League of Conservation Voters. John’s most recognizable accomplishment has been his promotion and preservation of local history and historic landmarks, bringing an unprecedented focus on the region’s rich history, and its legacy of historic Victorian architecture. His roots in historical preservation stem from his experience as a Revolutionary War re-enactor and member of The Brigade of the American Revolution for 50 years. John was instrumental in securing the preservation of the Lincoln Depot, now the Lincoln Depot Museum, where he now serves as President. The museum was recognized in 2015 as one of The Best Museums in Westchester. He also secured the preservation of historic Fort Hill as parkland, a 40-acre parcel that was originally a Revolutionary War encampment site. Under his leadership, the United States Dept. of the Interior declared Peekskill a “Preserve America Community.” John was able to establish a record number of National Register designations of local structures, including the first Downtown and Neighborhood Historic Districts and supported the preservation of the historic Miller House in North White Plains. In 2017 John was named a “Champion of History” by the Lincoln Society in Peekskill. John and his wife of 37 years, Nancy, live in Peekskill and have two adult children, John, Jr. (fiancé Courtney Kelly) and Katy (husband Mike Mearon). John and Nancy recently welcomed the arrival of their first grandchild, Lacey Mae, in 2019.
View all posts by John G. Testa →
This entry was posted in history, Uncategorized and tagged Cortlandt Manor NY, history, John Testa, Lincoln Depot, Peekskill NY, reenactment, Revolutionary War, westchester county board of legislators, Westchester County NY, Yorktown Heights NY. Bookmark the permalink.

5 Responses to Strange How These Things Happen