My Memories of the NY Jets in Peekskill 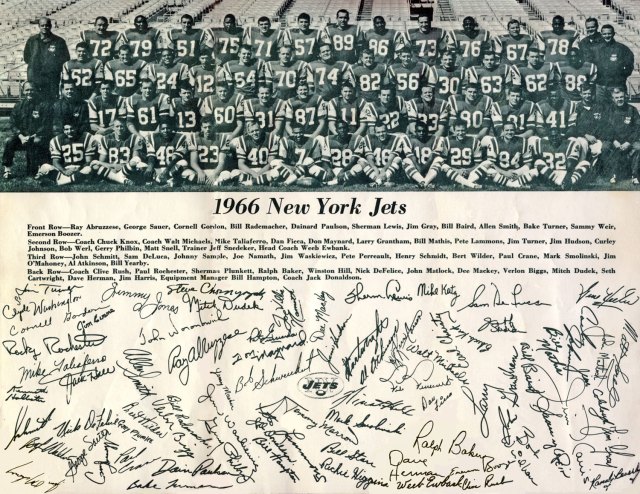 With the start of the new NFL football season this week and the high expectations for the NY Jets following last year’s outstanding showing, I thought I would reminisce about the years the Jets held their training camp in Peekskill.

Anyone who lived in Peekskill from 1963-1968 could give his or her own accounts of the players’ exploits and influence throughout the city. For me, between the ages of 5 and 10, I was treated with a rather unique perspective on the team’s impact.

The team’s owner, David “Sonny” Werblin purchased the NY Titans, changed their name to the Jets and established their training camp at Peekskill Military Academy beginning in the summer of 1963. Werblin had a financial interest in the academy (not sure how much) and his son was a student there so it was easy to see why he chose PMA.

The players didn’t much like the arrangement since the academy was old and the dorm rooms had no air conditioning. However, they made up for that by spending most evenings at one of the local bar/restaurants. I was not old enough to witness the colorful stories that emerged from many of those evenings but I have heard enough about them second hand.

Jim Turner on his way to practice. (© JGTesta)

For me, the memories all took place literally in my back yard. I grew up on Walnut Street just behind the Academy’s Administration Building. In fact, it is the only building that still stands from the academy and is presently the Administration Center for the Peekskill City School District. The rear of the building faced my backyard and the door to the locker room was a mere 50 feet away. There is a private sidewalk that leads from the locker room door directly to the practice field. My back yard ended just a few feet from this sidewalk. So every day, to and from practice, the players walked right past my house. My friends and I would greet them every day, help carry their helmets, talk to them, get their autographs and they would always be so nice and accommodating. They never seemed to get tired of us. One time on a very hot August day on the way back to the locker room after practice a few players ran into my backyard and jumped into our swimming pool – with all of their equipment on!

Because my father worked at PMA I was also able to see some of the players “after hours” around the academy. I would mostly just hang out around them but also talk to them. I remember quite a number of players who over the years were memorable for their kindness and just basically putting up with us kids. Players like Jim Turner, Matt Snell, Emerson Boozer, Don Maynard, Larry Grantham, George Sauer, Winston Hill and Sherman Plunkett.

However, there was one player who took me under his wing, so-to-speak, and let me pal around with him. He was Sam DeLuca. I would change the key on the “Universal Weight Bench” that changed the amount of weight (this was a new technology at the time that replaced barbells), we would talk about my schooling or whatever and he would bring me over to “Chet’s” (deli) on the corner of Elm and Wells Streets to buy me a soda to thank me for helping him. What a wonderful experience for a kid. I still think about it often.

Besides having some great players the Jets also had coaches that were already successful in professional football and others who would go on to make a name for themselves. Head Coach Weeb Ewbank was already a winning coach from the Colts and others were winning coaches in the making, such as Chuck Knox and Walt Michaels.

Of course the big year was 1965 when Joe Namath came to town. Werblin spent a lot of money to sign him and much was expected. The media was also right there to capture much of it. I didn’t realize how much of an influential person Sonny Werblin was until long after the Jets left Peekskill for good in 1968. He was a powerful and successful man who made his mark through the Music Corporation of America (MCA). He was one of the biggest talent agents in the country and managed dozens of stars including Ed Sullivan, Jackie Gleason (who has his own Peekskill Story), Abbot and Costello, Joan Crawford, Eddie Fisher, Jack Benny and Liberace to name just a few. He also handled some of the major TV shows of the day like My Three Sons, Wagon Train, Mike Hammer, The Virginian and Bachelor Father. On top of that he was the Director and major stakeholder in Monmouth Park Racetrack.

Namath was an experience all in itself for me. He was under a lot of pressure and frequently teased by his teammates so he wasn’t particularly as friendly as the other players. One time a player instructed me to say something to Namath, I can’t remember which one or what he had me say, but Joe didn’t like it. Yes, I remember what he said back to me but I can’t say it here. My father had some interesting interactions with Namath which he enjoyed telling people about for many years.

Growing up in Peekskill was a wonderful experience and having the NY Jets be a part of that for a short time contributed greatly to that. Having a professional football team come to town each year was a great treat and could never happen in the same way today. We were all sad when they left in 1968. PMA closed it doors after that year as well. Most of the buildings were demolished and Peekskill was never the same. Some day I will tell the PMA story as well. However, 1969 was great for one reason, we were able to watch some of the players we knew win a National Championship and give us in Peekskill a lifetime of memories.

Former District 1 County Legislator, John G. Testa is served five terms at the Westchester County Board of Legislators, spending the last 3 terms as BOL Minority Leader. John G. Testa is a lifelong resident of Peekskill who first entered elected public service as a member of the Peekskill Common Council in 1998 and then served three terms as Mayor. He previously served on the Conservation and Parks Advisory Board and Zoning Board of Appeals. John became an elected official eager to improve the City in which his family has lived for more than a century and quickly earned a reputation as a strong, independent, nonpartisan voice for fiscal responsibility. John received a BS degree in Technology from SUNY Oswego, where his academic achievements gained him induction into Epsilon Pi Tau, the International Honorary Fraternity of Technology. He earned his MS degree in Technology from the City College of New York. He began his teaching career in 1980 at Peekskill High School, his alma mater, as an instructor in Technology and Social Studies, retiring in 2013 after 33 years teaching. John has been a leader in support for the Arts Community in Westchester. He presided over the construction of the Peekskill Art Lofts, the establishment of the Hudson Valley Center for Contemporary Art, and the complete restoration of the Paramount Center for the Arts, originally a 1930’s movie house and helped bring critical funding to many Westchester programs. Legislator Testa received the “Advancing the Arts in Westchester Award” by ArtsWestchester. John has a been a leader on environmental issues for two decades and has a long record of initiatives he has supported and spearheaded. His active involvement in developing and promoting environmentally friendly policies began as mayor and continued throughout his time as Westchester County Legislator. His efforts consistently earned John the endorsement of the NY League of Conservation Voters. John’s most recognizable accomplishment has been his promotion and preservation of local history and historic landmarks, bringing an unprecedented focus on the region’s rich history, and its legacy of historic Victorian architecture. His roots in historical preservation stem from his experience as a Revolutionary War re-enactor and member of The Brigade of the American Revolution for 50 years. John was instrumental in securing the preservation of the Lincoln Depot, now the Lincoln Depot Museum, where he now serves as President. The museum was recognized in 2015 as one of The Best Museums in Westchester. He also secured the preservation of historic Fort Hill as parkland, a 40-acre parcel that was originally a Revolutionary War encampment site. Under his leadership, the United States Dept. of the Interior declared Peekskill a “Preserve America Community.” John was able to establish a record number of National Register designations of local structures, including the first Downtown and Neighborhood Historic Districts and supported the preservation of the historic Miller House in North White Plains. In 2017 John was named a “Champion of History” by the Lincoln Society in Peekskill. John and his wife of 37 years, Nancy, live in Peekskill and have two adult children, John, Jr. (fiancé Courtney Kelly) and Katy (husband Mike Mearon). John and Nancy recently welcomed the arrival of their first grandchild, Lacey Mae, in 2019.
View all posts by John G. Testa →
This entry was posted in history, Uncategorized and tagged 1968, 1969, AFL, football, John Testa, Namath, NFL, NY Jets, NY Titans, Peekskill Military Academy, Peekskill NY, PMA, Sam DeLuca, Sonny Werblin, Westchester County NY. Bookmark the permalink.

4 Responses to My Memories of the NY Jets in Peekskill