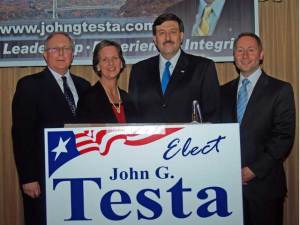 Special thanks to George Oros for being the event MC, County Executive Rob Astorino for his endorsement and County Legislator Sheila Marcotte for attending the announcement.

On April 28, 2011 in front of a standing room only crowd at the Cortlandt Colonial Restaurant I announced my bid to run for re-election to the Westchester County Board of Legislators. It was a great event and I appreciate all who attended to lend support and encouragement. Special thanks to event MC George Oros and to County Executive Rob Astorino for his endorsement.

It has been an honor to serve the residents of Peekskill, Cortlandt and Yorktown over the last 16 months. By working together with my colleagues in the GOP caucus and County Executive Astorino we were able to change the dialog when it comes to county government. Smaller, more efficient government and reduced spending and taxes have for the first time in 12 years become the focus of the policies of Westchester County government. We were able to cause a reduction in county taxes for the first time in recent memory.

Although we have made great strides in such a short time it has not been easy. The supermajority of the county board continuously put roadblocks in the way of reduced spending. They overrode the vetoes of the County Executive to restore over $30 million in additional spending into the 2011 budget and have ignored the county charter by creating their own law department to challenge his authority to spend less money and streamline county government.

I am looking forward to continuing the work we have started in White Plains and appreciate all those who turned out at the event to help me launch my campaign for a second term as County Legislator for District 1.

John G. Testa, a life-long resident of Peekskill, began his first term on the Westchester County Legislature in January 2010. Prior to his successful run for the District 1 Legislative seat, he served 3 terms as Mayor of Peekskill from January 2002 until December 2007. Before becoming mayor he also served a four-year term as a Councilman. From his first days in office Testa worked tirelessly to set the City on the path of economic stability. Peekskill flourished under this plan, increasing the city fund balance to its highest in history. During John’s tenure in office, the NY State Comptroller’s Office named Peekskill one of the most fiscally sound municipalities in the State; independent auditors proclaimed Peekskill as being in its best fiscal condition in over 30 years; and Moody’s Investor Service agreed to upgrade its bond rating, resulting in further savings. The plan he put in place was so successful that it enabled the City of Peekskill to pass three budgets in a row with a 0% tax increase. These fiscal skills will prove valuable to Testa as he works to put the brakes on what has been wildly escalating county spending and unchecked government growth. He has pledged his efforts to work to consolidate services, eliminate wasteful spending and improve efficiency. In addition to the fiscal conservatism that served Peekskill so well, Testa worked to promote the city, attracting investment, jobs and an increased tax base. Over $100 million of private investment came to Peekskill in the forms of new residential construction, retail space, and the redevelopment of historic structures. As Mayor, Testa led a successful battle to stop the unfair and unsafe plan to send sewage to the Peekskill plant from outside the sewage/water district. John’s roots are deep within the soil of Northern Westchester. His father’s family has lived here for more than a century and his mother’s family is nearing that mark. He is proud that he was born in Peekskill and has lived and worked here all his life and, with his wife Nancy raised their two children here.
View all posts by Legislator John G. Testa →
This entry was posted in politics, Uncategorized and tagged Cortlandt Manor NY, George Oros, John Testa, Peekskill NY, reelection, Rob Astorino, Sheila Marcotte, Westchester County NY, Yorktown Heights NY. Bookmark the permalink.